Here at Patrol Base we’re lucky to get a hold of the newest offering from ARES, their latest AMOEBA Rifle, the new AM-016, and part of their amazing EFCS 6mm Electric AEG BB Gun Range.

The AMOEBA range of rifles have been out for a while now, and ARES keep updating their line and bringing out new a cool looking parts and accessories from the range, improving with every iteration they are always bringing out new Airsoft Guns which are great not only for Beginners, but for seasoned Veterans who are looking for a gun which offers both consistency and reliability.

The AM-16 is no exception, not only incorporating everything you’d expect from an AR Platform weapon, but incorporating all the bells and whistles which put them leaps and bounds above other rifles in their price range. The rifle is based on the AM-013 Honey Badger M4 design, but has taken it to the next level by taking feedback on the previous build and redesigned it to tick all the boxes.

The weapons build quality remains unchanged, with a high quality low weight polymer body and heavy duty alloy handguard making the weapon very tough but with a low weight making it more maneuverable indoors and outdoors but gives the user an edge by allowing them to make faster snapshots. ARES have also made the wise decision of making all moving parts from Alloy, making them last longer, such as the Skeleton Stock Arms, Magazine Release, Handguard and Trigger which will see the most use on the weapon during use.

The weapon is suited for a variety of situations, allowing for use in both CQB Environments. The weapon can be shortened to various lengths making it compact enough to use in small spaces whilst still retaining the range and accuracy that the weapon benefits from in outdoor skirmishes.

Out the box, on average, the weapon clocks in at around 295fps, meaning the gun can be used at almost every site in the UK. Due to the lower power of the Spring the weapon boasts an impressive Fire Rate, and if needed the spring can be replaced easily for those who want to use heavier weight BBs.

Keeping consistent with the Amoeba range of weapons the Gearbox features Version 2 ARES EFCS Fire Control System, arguably the weapons greatest boon. The EFCS Gearbox system is unique to Amoeba, integrating the features of high end MOSFET systems into the gearbox without the hassle of installation. The EFCS gearbox has been around for a while now, but has continually improved through various tweaks, such as an upgraded Blue MOSFET chip which allows for better Amperage Variations and, making more stable Quick Change Spring System with higher SP Rated Springs. The gearbox is also compatible with LiPos and Ni-Mh Batteries.

Another cool little known fact is that instead of using a mechanical system for the Fire Selector plate a small magnet is used which activates a transducer on the MOSFET, which increases the lifespan of the fire select greatly.

A Key feature of the system are the Electronic Trigger which allows for a shorter trigger pull, leading to a faster rate of fire in Semi Automatic, and a Reprogrammable Fire Select which allows the user to set various fire modes. Additionally, using the Reprogrammable Fire Select the user can set the Full Automatic mode to Burst Fire for more controlled shooting, or lock the weapon to Semi-Automatic for DMR setups through the use of their Programming Box.  The change is made quickly and easily by simply plugging the weapon and battery into the ARES Reprogramming box, and is as simple as switching the dial to the required setting and pressing enter.

A great feature of the Gearbox is the Quick Change Spring System, known by the ‘RVTS Rapid Velocity Tuning System’ , allowing you to quickly change the power of the weapon without completely disassembling the Gearbox like a traditional AEG, this allows you to quickly change the FPS rating of the weapon even at a game site with no worry should you weapon be over the limit for a specific field.

Like most Airsoft Rifles the weapon features an adjustable Hop-Up System, which is revealed behind the Mock Bolt Plate when the Mock Charging Handle is pulled to the rear, and features a Radial Adjustment Dial for easier quick changes during gameplay. The Hop-Up unit is designed to add range and accuracy to your shots by imparting spin on the BB, this allows the BB to affect the air around it via the Magnus Effect which gives the BB uplift for added range. By being adjustable the Hop-Up allows for a range of BBs to be used, allowing the use of 0.28g BBs with an upgraded spring, which are great for outdoor Skirmishes adding a level of accuracy and range at the cost of speed.

To go with the impressive internals, the weapon features a selection of brand new external pieces. The outer construction features pieces from the new OCTARMS furniture range, which boast high quality finishings and a great modular design.

The handguard is part of the OCTARMS range, featuring a top 13.5’’ 20mm RIS / RAS Rail which lines up with the Receiver top rail to create a full length top rail for large scope setups and magnifier setups, as well as Side and Bottom KeyMod panels giving the user plenty of aftermarket options for attachments. The KeyMod panel slots are a new feature to Airsoft, after being out for some time this open source design allows for attachments to be easily and quickly removed and attached, and provides a stronger hold over traditional 20mm RIS / RAS Rail alternatives. Ares offer a range of Keymod attachments designed to allow the user to modify the weapon to requirements, providing access to modular Hand Stop Panels, Vertical Grips, Torch Mounts, Covers and Sling Mount Points.

The Stock System is also new and improved over the AM-013 design, with a more durable design, with stronger Six Position Arms, and a textured Buttstock, and most notably: an extended battery compartment. One of the biggest problems with the AM-013 battery compartment was that there was not enough space to store larger LiPo batteries leading to a range of battery box extenders being released. With this variant the stock comes with a preinstalled extender, allowing the comfortable use of stick batteries, and can even be removed to make the weapon more compact.

The Arms of the Stock are also a lot thicker, making them more durable and will take more punishment, and allows for up to Six Positions to be set, and is adjustable via a large ambidextrous push button making it easier for glove users. The rear also features a Sling Loop, allowing the attachment of various Single Point Sling setups.

The butt plate of the stock now features a more raised texture, making an even greater slip-resistant surface when pressed against Rigs and Vests, allowing for a stronger shooting stance and grip point. 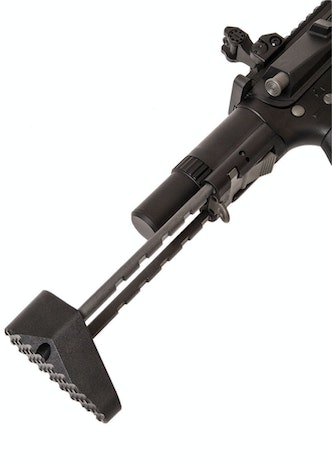 The Pistol Grip is part of the Amoeba Pro Accessories range, featuring a sleek design for an easier grip, and can be replaced with other Grips in the Pro Range, which features Dual Tone grips for a more unique look and design. The grip itself is designed to be thinner, which gives easier access to the weapons functions using your Trigger Hand, allowing you to easily reach the Fire Select with your Thumb, and the extended Magazine Release with your Index Finger, meaning you should never have to remove your hand from the weapon.

The magazine included with the weapon is the standard 300rnd High Capacity AMOEBA magazine, and is designed by ARES. The magazine is filled from the top by flipping open the filing window and pouring the BBs easily into the top, and once filled is wound using the bottom winding wheel which feeds BBs into the Weapon’s Hop-Up unit.

The magazine also features a flip out Magazine Pull, which allows the magazine to be manipulated using a single finger. This has multiple benefits, such as allowing magazines to be pulled from pouches with ease, and gives the user the ability to keep hold of the magazine even when switching out to a fresh one, rather than dumping it on the ground and potentially losing it. 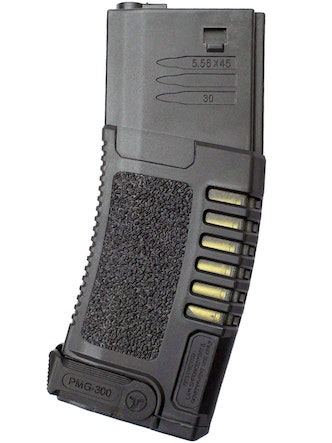 Other external features include the unique ‘Shield Breaker’ Flash Hider, which gives the weapon a bit of unique flair, and can be removed it reveal a 14mm Clockwise (CW) Thread, allowing the attachment of a range of Suppressors and Tracer Units.

The top rail also features removable Flip-Up Ironsights which can be either removed or kept for use should your main sight become smashed or batteries run flat.

The weapon can be purchased in six different variants, each with a different colour scheme, and is available in the following types:

As with any rifle, buying attachments can be a nightmare, here are some of the suggested attachments and additional accessories chosen by our staff to go with the Rifles. 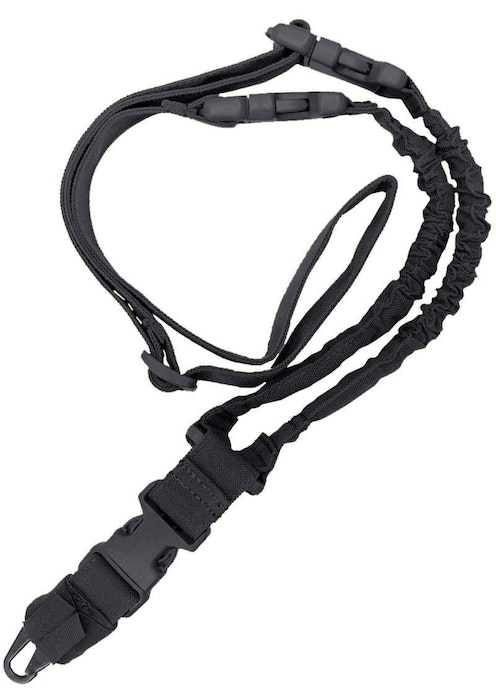 A KeyMod foregrip, designed to be attached to KeyMod Railed Hand Guards and provide an additional Grip
Point when handling your weapon. The Grip is constructed from AA 6036 Aluminium Alloy, making them lightweight and
extremely durable and is attached by unscrewing the bottom cap and using a long Allen Key to tighten the Screws
inside. 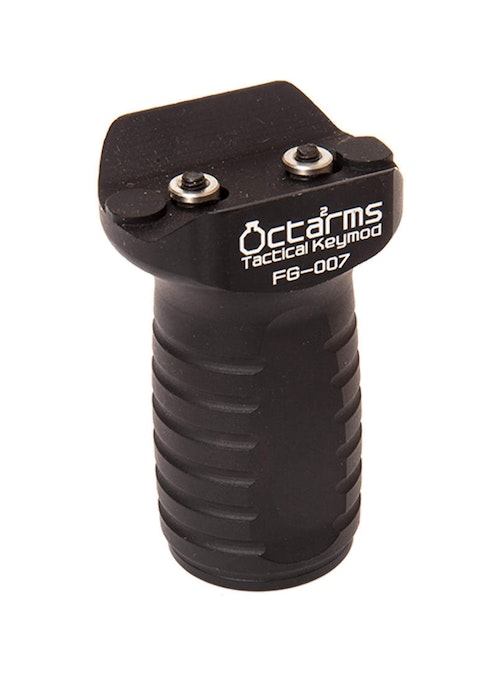 An Eotech 552 style holographic sight, affordable yet highly robust Airsoft optic that will fit onto any
20mm rail. Fully adjustable brightness, windage and elevation with Red and Green dot modes. Batteries are also
included along with a flip up / down lens protector. An ideal optic for a vast range of Arisoft RIFS. 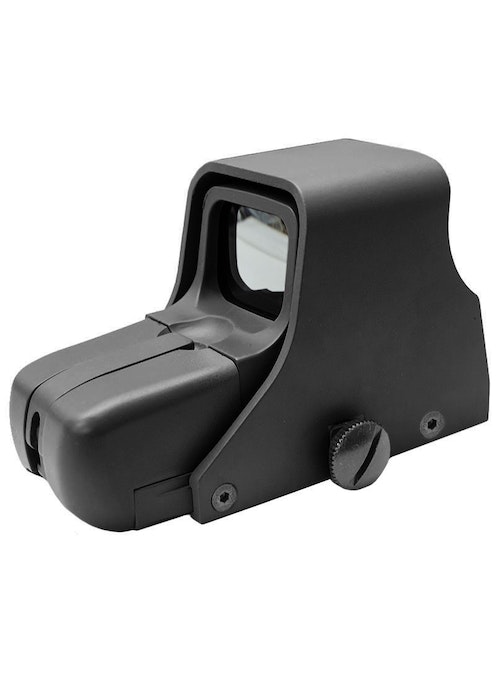 This newest offering from ARES is an amazing Rifle, and clearly shows their tenacity through constant developments and aim to be one of the best manufacturers in the Industry. We certainly hope you enjoy using the rifle, it's certainly got us counting down the days to payday.

Written by PatrolBase Jonny, who has written a total of 74 posts.

Posted in Patrol Base News | No Comments

Phone Lines open Monday to Saturday 9:30am to 5:30pm, but don't forget our Shop opens for late night visits Thursday until 9:00pm!